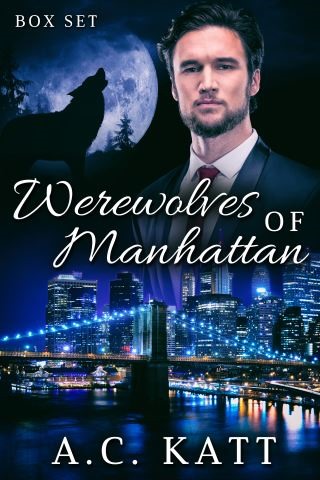 A.C. Katt's best-selling set of novels about werewolf billionaries in Manhattan who are looking for their mates. Contains all 8 books in the series.

His Omega: On his way home from a meeting of the North American werewolf council, Armand La Marche is stopped in his limousine by a boy who is hurt by an unknown assailant who murdered his friend. After decades of searching, Armand has found his mate. There is one problem, someone is trying to kill Sean.

Remy's Painter: Ian Sullivan is being chased by a mobster and has to come up with five thousand dollars he doesn't have. His only hope is an estimate for a large house. Little does he know that the house belongs to a loup garou who just happens to be his mate.

Scarred Mate: Alpha Marc Thierry orders Chinese and gets a musical voice on the line that calls to him. To his delight and surprise, the guy on the phone delivers his food and is his destined mate. Unfortunately, Colin Callahan thinks the only reason Marc could want him is biological -- he has to like his mate. Colin has a scarred face and thinks no-one could love him as he is. Can Marc convince him otherwise?

Marking Kane: Returning from his territory in Atlanta, Gabriel Martin stumbles across a man in an alleyway who has been gang raped. His mate.

Alexei's Mouse: After leaving his place as the Russian Second and immigrating to America, Alexei Davidoff just wants to settle in and not upset the status quo. He wants to start his position with Garou Industries and improve the conditions for his packs. The gods have a different plan for him.

Julio's Wolf: Etienne Daurensbourg is 139 years old and fears he’ll never find his Mate until his friend Alexei introduces him to Julio. Julio is Etienne’s Mate, but before he has a chance to court Julio -- who is a human high beta and therefore stubborn and independent -- Julio gets knifed and is forced to let Etienne provide him with a home and help to recover.

Wolf Whistle: Richard Kerrigan is on the verge of losing hope. Fired from his job for blowing the whistle on a defect that would harm service members if used as designed, he is now blacklisted in the Chicago area. A local Serbian mobster wants Richard and won’t take no for an answer.

Henri's Little One: After much hardship, Vitas Kosloff finds his Mate, Alpha Henri Giraud, Director of Security for the North American Council and Garou Industries. But Vitas is held captive by Fydor Chernof, the Russian First, who claims Vitas belongs to him. He escapes Chernof's torture with the aid of Chernof's two Betas, Anatoly and Maxim.