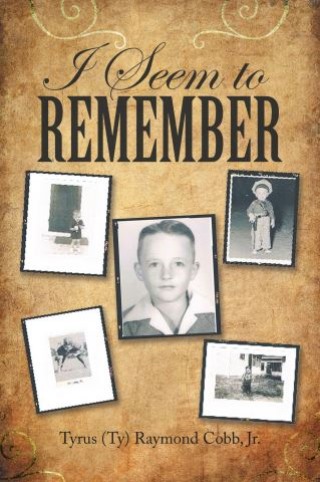 I Seem to Remember

Mid-20th Century “Huckleberry Finn” Arises in Oklahoma As a Baby, Did He Really See an Escaped Bear + Did He Swallow His Candy Money (Nickel & Two Pennies) + Did He Grab an Oscar in First Grade as “Best Shepard” + Was He King of Prairie Dog Town + Did He Bale 1,000s of Hay Bales with a New Holland Machine + Did he Get Caught Speeding with a Ford Tractor at Age 9 + Did He Sleep at the Police Station + After Being Bitten, Did He Outrun a Crazed Dog + Did He Dodge Polio + Did He Become a Zebra Football Letterman + Was He a High School Valedictorian + Did He Earn Appointment to West Point + A Laugh or Smile on Every Page

Tyrus (Ty) Raymond Cobb Jr.: Tyrus (Ty) Raymond Cobb, Jr. was born and bred in three small towns of Oklahoma: Duncan, Chickasha and Claremore. He graduated from the US Military Academy (West Point) in 1962 and served the Army for 21 years, including three one-year tours (Vietnam and 2 in South Korea) as a Ranger/parachutist infantry officer. Gaining a University of Texas Master’s Degree he taught West Point cadets for three years. After retiring, he and Beverly, his wife, opened a sports store in New Jersey and was then asked to join the Army as a civilian R&D engineer. He gained an MBA via night school and retired again after 20 years from the Army, as a civilian engineer. Along the ride, he and Beverly had two children, Christine and Tyrus III; those two gave them 5 grandsons (one of them Tyrus IV) and one granddaughter. The Cobb couple have lived in Salisbury, NC for sixteen years.