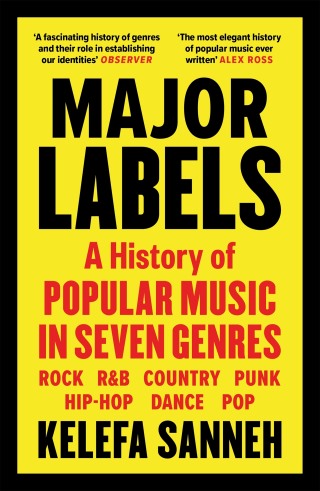 A History of Popular Music in Seven Genres

From his own adolescence, when his allegiance was to punk rock, to his work as one of the essential voices of our time on music and culture at the New York Times and the New Yorker, Kelefa Sanneh has made a deep study of how our popular music unites and divides us. Distilling a career’s worth of knowledge, Sanneh explores the tribes music forms, and how its genres, shape-shifting across the years, give us a way to track larger forces and concerns. He debunks cherished myths, reappraises beloved heroes and upends familiar ideas of musical greatness, arguing that sometimes the best popular music isn’t transcendent: it expresses our grudges as well as our hopes, and is motivated by greed as well as inspiration. Throughout, race is a powerful touchstone: just as there’s always been a ‘Black’ audience and a ‘white’ audience (with some overlap) there is Black music and white music and a whole lot of expropriation. This is a book to shock and awe the deepest music nerd, and at the same time to work as a heady gateway drug for the uninitiated.

Kelefa Sanneh: Kelefa Sanneh has been a New Yorker staff writer since 2008, when he left his position at the New York Times, where he had been the pop-music critic since 2002. Previously, he was the deputy editor of Transition, a journal of race and culture based at the W.E.B. Du Bois Research Institute, at Harvard University. His writing has also appeared in a number of magazines and a handful of books, including Shake It Up: Great American Writing on Rock and Pop from Elvis to Jay Z, a Library of America Special Publication, and Da Capo Best Music Writing (2002, 2005, 2007, and 2011).