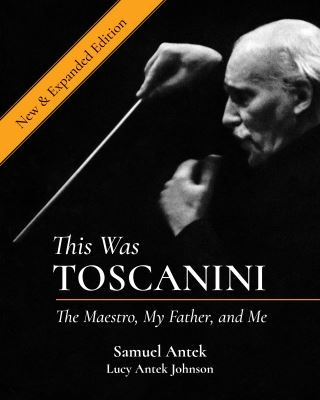 The Maestro, My Father, and Me

Arturo Toscanini is widely considered the greatest conductor of the modern age and remains a towering figure in the world of classical music. His explosive passions, dynamic music making, and legendary leadership continue to inspire and influence today's musicians while still captivating new generations of enthusiastic fans as well. This Was Toscanini is an intimate, firsthand, behind-the-scenes musical portrait of the Maestro, told from the unique perspective of first violinist Samuel Antek, who was fortunate to play under Toscanini's baton for seventeen years in the famed NBC Symphony Orchestra. In this expanded second edition of This Was Toscanini: The Maestro, My Father, and Me, Samuel Antek's reflections on playing with the Maestro gain sparkling new facets of insight from his daughter, Lucy Antek Johnson, as she enlightens readers with vivid recollections about her father and his most memorable musical partnership. With a foreword from acclaimed author and music historian Harvey Sachs and featuring Robert Hupka's iconic photographs throughout, this shining new edition will bring back the wonder of Toscanini's powerful style and his singular pursuit to make beautiful music.

Samuel Antek: Samuel Antek began his violin studies in Chicago and was then invited to New York to become a pupil and protégé of the famous teacher Leopold Auer. He soon won a fellowship to attend the Juilliard Foundation and, following his New York debut at Town Hall, played solo concerts extensively. In 1937, Mr. Antek was selected to become a first violinist for the NBC Symphony, an orchestra specially created by RCA for the legendary conductor Arturo Toscanini. He was a member of the orchestra for all of its seventeen years, from 1937 to 1954. With the support and encouragement of the Maestro and the guidance of conductor Pierre Monteux, Antek was able to launch his own career as a conductor. While continuing to play first violin for NBC, he was appointed musical director and conductor of the New Jersey Symphony in 1947; was named the associate conductor of the Chicago Symphony under Fritz Reiner; and, after inaugurating his distinctive Young People's Concerts series in New Jersey, was soon named the director of all Young People's Concerts of the Philadelphia Orchestra. He was invited to guest conduct many of the nation's major orchestras, including the NBC Symphony, Houston Symphony, and Buffalo Philharmonic, among others. Samuel Antek died suddenly at age forty-nine in January 1958. This Was Toscanini, his unique evaluation of the Maestro, was published posthumously.