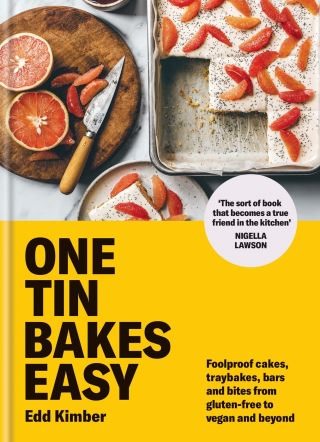 Foolproof cakes, traybakes, bars and bites from gluten-free to vegan and beyond

ALL NEW RECIPES FROM THE BESTSELLING AUTHOR OF ONE TIN BAKES

'The sort of book that becomes a true friend in the kitchen.' Nigella Lawson

One tin, 70 bakes - whether you want cookies or cakes, pastries or desserts, something fruity, chocolatey or nutty, baking just got even easier.

Every bake can be made in the 23 x 33cm (9 x 13in) tin used in Edd Kimber's previous book, One Tin Bakes, but Edd will also offer guidance on baking in a 20 x 20cm (8 x 8in) square tin as well as a loaf tin, making these perfectly simple bakes for everyone to try, whatever equipment you have to hand and whoever you're baking for.

You only need minimal skill to whip up something sensational - with ideas for bakes made in one-bowl or with 5-ingredients, as well as popular options for vegan, gluten-free and no-bake treats. One Tin Bakes Easy is full of versatile, achievable and indulgent recipes to wow your friends and family, that you will want to bake time and time again.

Praise for One Tin Bakes:
'A dazzler of a baking book.' Dan Lepard
'This book is an absolute must-have for every home baker.' Joy Wilson
'A terrifically clever idea.' Helen Goh

Edd Kimber is is a baker and food writer based in London. He is the author of The Boy Who Bakes (2011), Say it with Cake (2012), Patisserie Made Simple (2014) and One Tin Bakes (2020). Over the last ten years he has appeared on multiple television shows including Good Morning America, The Alan Titchmarsh Show, Sunday Brunch, Saturday Kitchen and, of course, on the original series of The Great British Bake Off, of which he is the inaugural winner.

He regularly shares his knowledge at cookery schools and at food festivals around the world and also writes for multiple publications, including as the baking columnist for Olive magazine.