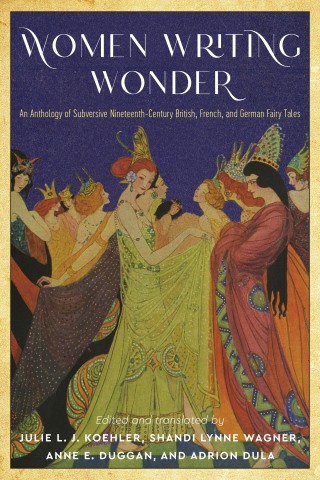 Women Writing Wonder: An Anthology of Subversive Nineteenth-Century British, French, and German Fairy Tales is a translation and critical edition that fills a current gap in fairy-tale scholarship by making accessible texts written by nineteenth-century British, French, and German women authors who used the genre of the fairy tale to address issues such as class, race, and female agency. These shared themes crossed national borders are due to both communication among these writers and changes in nineteenth-century European societies that similarly affected women in Western Europe. In effect, the combined texts reveal a common, transnational tradition of fairy tales by women writers who grapple with gender, sexual, social, and racial issues in a post–French Revolution Europe. The anthology provides insight into the ways the fairy tale served as a vehicle for women writers—often marginalized and excluded from more official or public genres—to engage in very serious debates. Women Writing Wonder, divided into three parts by country, features tales that depict relationships that cross class and racial divides, thus challenging normative marriage practices; critically examine traditional fairy-tale tropes, such as "happily ever after" and the need for a woman to marry; challenge the perception that fairy-tale collecting, editing, and creation was male work, associated particularly with the Grimms; and demonstrate the role of women in the development of the emerging field of children’s literature and moral tales. Through their tales, these women question, among other issues, the genre of the fairy tale itself, playing with the conventional fairy-tale narrative to compose their proto-feminist tales. By bringing these tales together, editors and translators Julie L. J. Koehler, Shandi Lynne Wagner, Anne E. Duggan, and Adrion Dula hope both to foreground women writers’ important contributions to the genre and to challenge common assumptions about what a fairy tale is for scholars, students, and general readers.