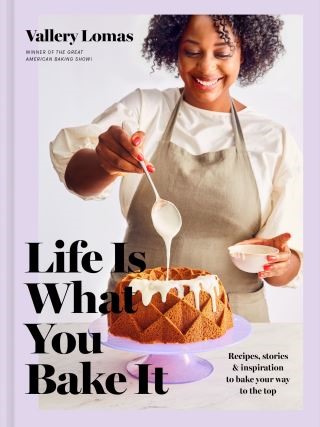 Life Is What You Bake It

Recipes, Stories, and Inspiration to Bake Your Way to the Top: A Baking Book

The winner of The Great American Baking Show shares her story of personal growth and more than 100 delicious recipes.

“As much about a collection of recipes that makes your mouth water and tugs at your heart with food memories as it is about the chronicles and life lessons of a true comeback kid.”—Carla Hall

Popular baking personality and lawyer turned baker Vallery Lomas was ecstatic when she learned she won the third season of The Great American Baking Show. However, her win was never seen by the world—Vallery’s season was pulled after just a few episodes when one of the judges became a focal point in a Me Too accusation. Rather than throwing in her whisk and lamenting all of the missed opportunities she hoped to receive (Book deal! Product endorsements! TV show!), she held her head high and hustled—which resulted in her getting press coverage everywhere from CNN to People magazine.

Now, Vallery debuts her first baking book. With 100 recipes for everything from Apple Cider Fritters to Lemon-Honey Madeleines and Crawfish Hand Pies to her Grandma’s Million Dollar Cake. Vallery shares heirloom family recipes from her native Louisiana, time spent in Paris, The Great American Baking Show, and of course sweets and breads inspired by her adopted hometown, New York City. Vallery’s “when life gives you lemons, make lemon curd” philosophy will empower legions of bakers and fans to find their inner warrior and bake their best life.

“Life Is What You Bake It is not only a collection of recipes but also an empowering book that shows us there’s often more possible than we can even imagine.”—Julia Turshen, bestselling author of Simply Julia, host of Keep Calm and Cook On podcast, and founder of Equity at the Table

Vallery Lomas: Vallery Lomas is the winner of The Great American Baking Show and the first Black winner of the Great British Bake Off franchise. She hosts the digital show Vallery Bakes Your Questions on Food Network’s website and the Food Network Kitchen app. She has also appeared on CNN, the Today show, Live with Kelly & Ryan, the History Channel, and the Hallmark Channel. Originally from Baton Rouge, Louisiana, Vallery attended college and law school in Los Angeles, practiced law in Washington D.C., and spent a gap year in Paris—where she perfected both her French and pastry skills—before settling in Harlem. She is a frequent columnist and recipe contributor to the New York Times.