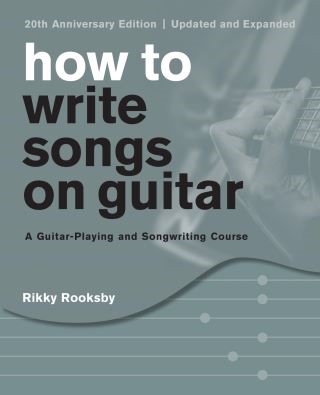 How to Write Songs on Guitar

A Guitar-Playing and Songwriting Course

You want to write songs, and you want to write them on guitar. This updated twentieth-anniversary third edition of the bestselling songwriting handbook shows you how. Learn the techniques and tricks used in two thousand great songs by everyone from the Beatles, Bob Dylan, and David Bowie to Kings of Leon, U2, Amy Winehouse, and Ed Sheeran. Explore and understand the four main elements of a song—melody, harmony, rhythm, and lyrics—and learn how to use them in exciting new ways. Master song structure, intros, bridges, chord sequences, and key changes. Make the most of your guitar, with innovative chords, scales, modes, tunings, and recording techniques. Use the skills and insights of the great songwriters to create better, more memorable songs.

The book gives many examples of classic chord sequences that can be used straight off the page. It explains the basic architecture of most songs. It contains an effective two-part chord dictionary for guitar, providing a set of basic shapes. A second section provides some chords for altered tunings. There are some examples of finger-picking patterns and strumming rhythms. There are chapters on lyric writing, rhythm, melody, and making a demo recording. There are inspirational quotes from famous songwriters, and a gallery of thirty notable albums from which much can be learned. It is everything you need to get started.

Rikky Rooksby: Rikky Rooksby is a guitar teacher, songwriter/composer, and writer on popular music. He is the author of How to Write Songs on Guitar (2000, revised edition 2009), Inside Classic Rock Tracks (2001), Riffs (2002, revised edition 2010), The Songwriting Sourcebook (2003, revised edition 2011), Chord Master (2004, revised edition 2016), Melody (2004), Songwriting Secrets: Bruce Springsteen (2005), How to Write Songs on Keyboards (2005), Lyrics (2006), Arranging Songs (2007), How to Write Songs in Altered Guitar Tunings (2010), and Songs and Solos (2014). He has also written fourteen Fastforward guitar tutors and arranged over three dozen chord songbooks, including The Complete Beatles. He has written entries on rock musicians for the Oxford Dictionary of National Biography, and published interviews, reviews, and transcriptions in many UK music magazines. He is a member of the Society of Authors, Sibelius One, and the Vaughan Williams Society