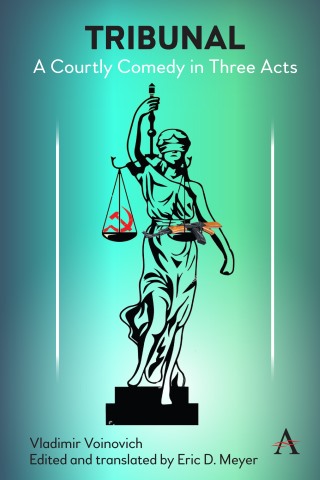 A Courtly Comedy in Three Acts

Vladimir Voinovich’s Tribunal: A Courtly Comedy in Three Acts is a scathing satire on the 1960s/1970s Soviet show-trials by one of the most famous Soviet dissidents, who was sometimes called Russia’s ‘greatest living satirist.’ Based upon his reaction to the Sinyavski/Daniel trial in 1966, which caused him to begin to write harshly critical letters to Premier Leonid Brezhnev and finally resulted in his expulsion from the Soviet Union in 1981, Voinovich’s Tribunal is a monument to the Soviet dissidents of the Cold War period and a sardonic critique of the censorship and persecution of dissident writers everywhere. Voinovich’s classic comedy describes the black humoresque high jinks and outrageous shenanigans that ensue when an unsuspecting couple of Soviet citizens, Senya and Larissa Suspectnikoff, clutching their free tickets in their innocent hands, walk into a crowded theatre, expecting to watch a Chekhovian comedy, only to become caught up in the sinister machinations of a Soviet criminal tribunal and its madcap version of the Moscow show trials.

Eric D. Meyer is an independent scholar with a Ph.D. from the UW-Madison (1991). He is the author of Questioning Martin Heidegger (University Press, 2103).