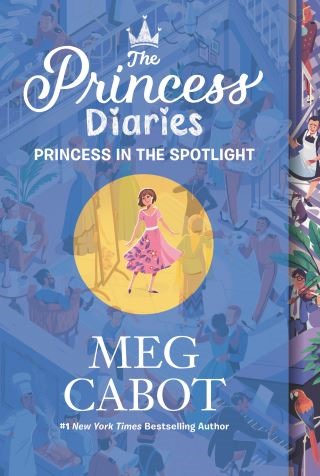 The Princess Diaries Volume II: Princess in the Spotlight

The one and only Mia Thermopolis is back and ready to reign! Celebrate the 20th anniversary of Meg Cabot’s blockbuster series in royal style—with all-new middle grade editions of the first three books!

Just when Mia thinks she has the whole princess thing under control, things get out of hand, fast.

First there’s an unexpected announcement from her mother. Then Grandmère arranges a national primetime interview for the brand-new crown princess of Genovia. On top of that, intriguing, exasperating letters from a secret admirer begin to arrive.

Soon Mia is swept up in a whirlwind of royal intrigue the likes of which hasn’t been seen since volume I of the Princess Diaries.

Princess in the Spotlight is the second book in the beloved, bestselling series that inspired the feature film starring Anne Hathaway and Julie Andrews.

Meg Cabot’s many books for both adults and tweens/teens have included multiple global and #1 New York Times bestsellers, selling over twenty-five million copies worldwide. Her Princess Diaries series has been published in more than 38 countries and was made into several hit films by Disney. Meg is still waiting for her real parents, the king and queen, to restore her to her rightful throne. She currently lives in Key West, FL, with her husband and various cats.