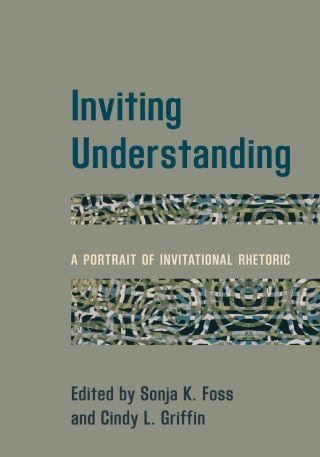 A Portrait of Invitational Rhetoric

Inviting Understanding: A Portrait of Invitational Rhetoric is an authoritative reference work designed to provide a comprehensive overview of the theory of invitational rhetoric, developed twenty-five years ago by Sonja K. Foss and Cindy L. Griffin. This theory challenges the conventional conception of rhetoric as persuasion and defines rhetoric as an invitation to understanding as a means to create a relationship rooted in equality, immanent value, and self-determination. Rather than celebrating argumentation, division, and winning, invitational rhetoric encourages rhetors to listen across differences, to engage in dialogue, and to try to understand positions different from their own.

Organized into the three categories of foundations, extensions, and applications, Inviting Understanding is a compilation of published articles and new essays that explore and expand the theory. The book provides readers with access to a wide range of resources about this revolutionary theory in areas such as community organizing, social justice activism, social media, film, graffiti, institutional and team decision making, communication and composition pedagogy, and interview protocols.

Current cultural, social, and political divisions in the United States and across the world suggest that the principles and practices of invitational rhetoric are sorely needed, and a volume that demonstrates its application in various contexts may inspire readers to put it into practice in the contexts in which they work and live.