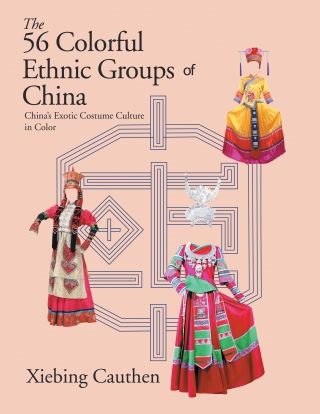 The 56 Colorful Ethnic Groups of China

There are 56 separate ethnic groups in China, some with histories going back thousands of years. Scattered throughout China, the groups have different cultures, eating habits, languages, musical traditions, living conditions, traditional costumes and religious beliefs. Many of these groups have languages of their own that are still spoken today. By outlining these different groups and showing them in their natural habitat this book takes a look at an element of the Chinese culture that is rarely seen. Whether it’s the ancient Dongba religion of the Naxi, the world famous tea production of the She, the gentle and beautiful folk songs of the Bouyei or the ancestor-worshiping Zhuang, one is struck by the richness of Chinese ethnic life and the great variety of its dress. For example, the clothing of the Mongolian ethnic group located in northwest China reflects a long and rich nomadic tradition. Jewelry, robes, belts and boots are the four main elements of this ethnic group. Mongolian women wear head ornaments made from gold, silver, pearl and agate. The culture of the Miao people living in Southern China is also reflected in their clothing which has been called the most beautiful in the world. Miao clothing is renowned for its world-famous embroidery as well as for its eye-catching colors and intricate silver decorations. This book, through written summaries and color photographs of the costumes of each of the various ethnicities, gives the reader a rare opportunity to see this diverse and complicated element of Chinese culture. The special attire of each ethnic group is described in words and color photographs, organized so as to show the striking complexity and variety of the various forms of ethnic dress in China.

Xiebing Cauthen: Xiebing Cauthen was born and raised in Liaoning, China. After studying art in Liaoning and later Chinese literature at the Beijing University she taught Chinese drama and played key roles in several Chinese dramas. She later became a movie actress, television and movie screenwriter, and director, yet found time to write poems, essays and several novels. For her professional movie acting, writing and directing work, she received a number of Chinese provincial and national awards. Since coming to the United States in 1997, Xiebing has taught Mandarin to adults and children in Fremont, San Mateo, Alameda and Oakland, California. She is an expert in the Chinese language, culture and literature. Xiebing founded the Dasen Chinese Language Academy in 2003 for the purpose of teaching Mandarin to children and adults. In 2012 she broadened the curriculum to also include meditation techniques, Asian tea art, music, dancing and classical movies. Reflecting the new and expanded course of study, she renamed her facility the Dasen American Academy. In all her teaching Xiebing tries to bring the best of Eastern and Western culture to her students. The goals of her non-profit Academy can be summed up in three words: "Empathy, Ethics and Etiquette ". Her focus is always on increasing the self-confidence of her students and in teaching them to be better citizens and lead happier and more productive lives. In recent months she has been getting her new Dasen Multi-Ethnic Museum up and running and devoting herself more to her writing. She continues teaching her young charges, but now, because of the pandemic, it’s by Zoom meeting.