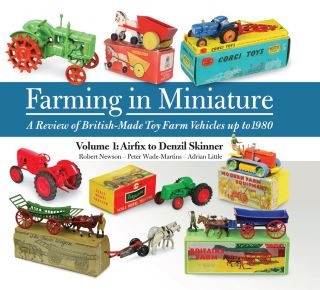 A Review of British-made toy farm vehicles up to 1980

Farming in Miniature is an essential guide for collectors of British toy models interested in farm tractors, farm horses and associated agricultural equipment. The manufacturers / brands are arranged alphabetically. Each manufacturer has its own chapter introduced by an account of its history. These introductions cross-refer to the captioned photographs that follow and which make up the bulk of the chapters. In their general introduction the authors say that they have attempted to illustrate all significant variations of colour and packaging, particularly of rare or unusual models, so as to make the book as comprehensive as possible. The three authors, all leading authorities, have drawn on their extensive past experience coupled with another five years to research, write and prepare photographs.

Robert Newson: Robert Newson is a chartered accountant who started collecting Matchbox toys as a teenager. His interest developed into research and writing about the less well-known British manufacturers of diecast and lead vehicles. He has written extensively for toy collectors magazines.|||Dr Peter Wade-Martins has spent his working life as an archaeologist in Norfolk, with a special interest in countryside conservation. His other interests include rare sheep breeds. He has made a 20-year study of farm models.|||Adrian Little founded Mercator Trading Ltd (dealers in interesting toys) in 2003. The company specialises in the minor makers, vintage figures and pre-Second World War items. The three authors work has been collated by Brian Bastiman. Brian is retired from the national agricultural advisory service ADAS where he spent much of his time writing and editing scientific reports and papers.