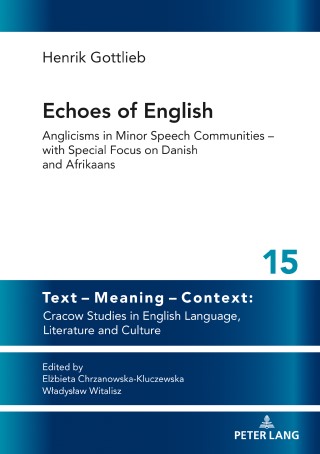 In today’s world, the English language exerts an unprecedented influence internationally, and its echoes are present in almost all languages. These echoes, also known as Anglicisms, are no longer limited to English-sounding loanwords. The English impact includes a wide range of linguistic phenomena, all of which are discussed in this book, presenting a taxonomy accommodating all types of linguistic outcome of contact with English. While the outlook remains international, the focus is on Danish and Afrikaans, two Germanic languages spoken in societies with very different histories involving English. A number of chapters present diachronic corpus studies showing that the English influence on Danish in the 21st century resembles the impact felt by Afrikaans speakers already in the 20th century.

"The book is highly original and differs markedly from other works on Anglicisms. For instance, the author takes advantage of his knowledge of the field of translation studies to write a thought-provoking chapter on translation (including subtitling and dubbing) as a vector for English influence. The initial chapters give the state of the art in studies on Anglicisms on the world stage (not just for Danish), drawing on the work of many scholars, expressed in a multitude of languages. The argumentation of the book is based on hands-on research, much of which was carried out by the author himself. The style is an excellent compromise: a measured, authoritative language with a bright conversational lift. It will appeal to both students and a broader readership."

Henrik Gottlieb is an associate professor of English at the University of Copenhagen. He holds an MA in English and Applied Linguistics and a PhD in Translation Studies. He has published widely on the English influence on minor languages, especially Danish, since 1999. In 2008, he lived and guest-lectured in South Africa.