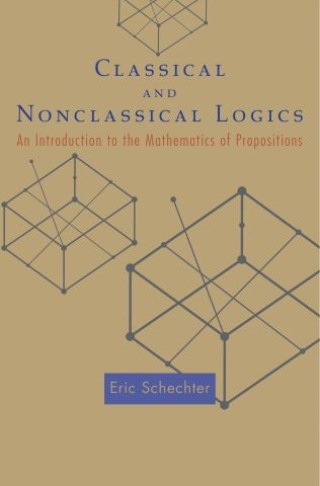 An Introduction to the Mathematics of Propositions

So-called classical logic--the logic developed in the early twentieth century by Gottlob Frege, Bertrand Russell, and others--is computationally the simplest of the major logics, and it is adequate for the needs of most mathematicians. But it is just one of the many kinds of reasoning in everyday thought. Consequently, when presented by itself--as in most introductory texts on logic--it seems arbitrary and unnatural to students new to the subject.


In Classical and Nonclassical Logics, Eric Schechter introduces classical logic alongside constructive, relevant, comparative, and other nonclassical logics. Such logics have been investigated for decades in research journals and advanced books, but this is the first textbook to make this subject accessible to beginners. While presenting an assortment of logics separately, it also conveys the deeper ideas (such as derivations and soundness) that apply to all logics. The book leads up to proofs of the Disjunction Property of constructive logic and completeness for several logics.


The book begins with brief introductions to informal set theory and general topology, and avoids advanced algebra; thus it is self-contained and suitable for readers with little background in mathematics. It is intended primarily for undergraduate students with no previous experience of formal logic, but advanced students as well as researchers will also profit from this book.

Eric Schechter: Eric Schechter, Associate Professor of Mathematics at Vanderbilt University, is the author of Handbook of Analysis and Its Foundations.