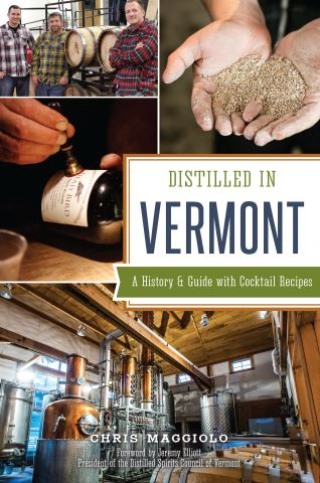 A History & Guide with Cocktail Recipes

Vermont is known as a center of contemporary craft food and beverage production, and the distilled spirits industry is no exception. From a handful of ambitious entrepreneurs a decade ago, the state now boasts more than fifteen distilleries and growing. But getting a product from concept to glass involves more than just trial and error. The ingredients, production processes and marketing techniques are as varied as the distilleries themselves. From SILO Distillery in Windsor to Stonecutter Spirits in Middlebury, each producer reveals its stories as it recounts the trials and tribulations of distilling in the Green Mountain State. Join author and distiller Chris Maggiolo as he reveals the unique and complex journey of taking a product idea to market in a state known for its innovation.

Chris Maggiolo: Chris Maggiolo's passion for beverages began with the study of rum and herbal remedies in the Caribbean and has since spanned careers in wine, beer and distilled spirits. He holds a BA in anthropology and environmental policy from the College of William and Mary and an MLA in gastronomy from Boston University. Having served as head distiller of SILO Distillery, he currently consults for distilleries in the northeastern United States and Canada. A native of Virginia, Chris now happily resides in Weathersfield, Vermont, with his wife, Laura, and their American foxhound, Barbarella.