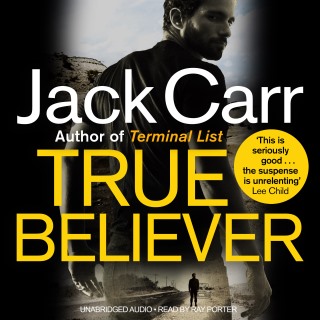 A high-intensity roller-coaster ride, True Believer explodes with action and authenticity that cements Jack Carr as the new leader in political thrillers.

Following his brutal quest for revenge, former Navy SEAL James Reece has fled the United States, emerging deep in the wilds of Mozambique. But he can’t stay hidden for long – when a string of horrific terrorist attacks plagues the Western world, the CIA tracks him down and recruits him.

Now a reluctant tool of the United States government, Reece must travel the globe, targeting terrorist leaders and unravelling a geopolitical conspiracy that will have worldwide repercussions . . .

Jack Carr: Jack Carr is a New York Times bestselling author and former Navy SEAL. He lives with his wife and three children in Park City, Utah. He is the author of The Terminal List, True Believer, and Savage Son. Visit him at OfficialJackCarr.com and follow along on Instagram, Twitter, and Facebook at @JackCarrUSA.