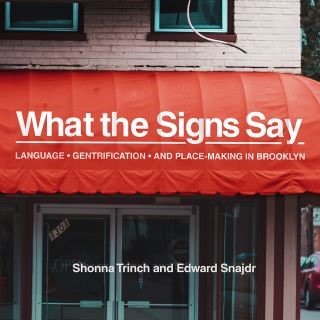 What the Signs Say

Language, Gentrification, and Place-Making in Brooklyn

Although we may not think we notice them, storefronts and their signage are meaningful, and the impact they have on people is significant. What the Signs Say argues that the public language of storefronts is a key component to the creation of the place known as Brooklyn, New York. Using a sample of more than two thousand storefronts and over a decade of ethnographic observation and interviews, the study charts two very different types of local Brooklyn retail signage. The unique and consistent features of many words, large lettering, and repetition that make up Old School signage both mark and produce an inclusive and open place. In contrast, the linguistic elements of New School signage, such as brevity and wordplay, signal not only the arrival of gentrification, but also the remaking of Brooklyn as distinctive and exclusive.

Shonna Trinch and Edward Snajdr, a sociolinguist and an anthropologist respectively, show how the beliefs and ideas that people take as truths about language and its speakers are deployed in these different sign types. They also present in-depth ethnographic case studies that reveal how gentrification and corporate redevelopment in Brooklyn are intimately connected to public communication, literacy practices, the transformation of motherhood and gender roles, notions of historical preservation, urban planning, and systems of privilege. Far from peripheral or irrelevant, shop signs say loud and clear that language displayed in public always matters.