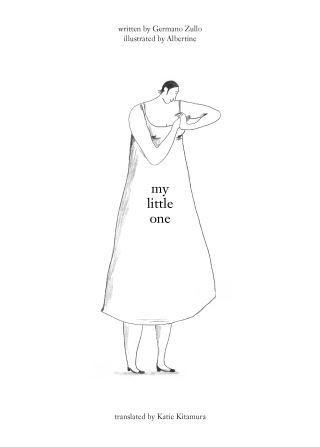 Winner of the 2016 Bologna Ragazzi Award, My Little One is a series of sparse and rhythmic images drawn in simple grey pencil, measuring like a metronome the boundless love between mother and son.

A mother, welcoming her tiny son into the world, tells him the story of their lives, whispering to him as she swings him gently around. With each successive page, he grows while she shrinks, until she is being held by the man he has become. Albertine's weightless strokes and billowing bodies recall the flitting procession of a flipbook or an ephermeral notebook sketch. She choreographs the peculiar dance of aging, of the way our bodies fold, lean, tuck into one another as we grow old. Filled with poetry and questioning, Germano whittles his words down - each precise line reminds us of the pithy goodness of childhood. An eloquent portrait of life's waxing and waning, My Little One is a moving celebration of constant, unconditional love.

Germano Zullo: Germano Zullo is a prolific writer and poet who has published numerous screenplays, short stories, novels, and illustrated books. He has received, among other awards, the prestigious Prix Sorciere in 2011.

Albertine was born in a Swiss village in 1967. In 1990 she opened a screen-printing workshop and since then has exhibited drawings, screen prints, and more in Geneva and around the world. She married and began her long artistic relationship with Germano Zullo in 1996. Their collaborations have received the Golden Apple of Bratislava (1999), a New York Times Best Illustrated Book (2012), and a Bologna Ragazzi Award for Fiction (2016), among other awards. About the translator: Katie Kitamura is a critic and novelist living in New York City. She is the author of Gone to the Forest and A Separation. A recipient of a Lannan Residency Fellowship, Kitamura has written for The New York Times, The Guardian, Granta, and BOMB. My Dearest One will be her first published translation.