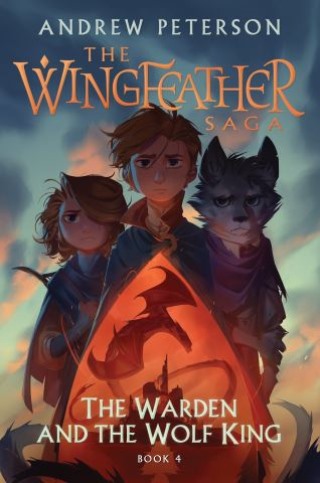 The Warden and the Wolf King

Our intrepid heroes are caught in the middle of an epic showdown between good and evil in the fourth and final novel of the Wingfeather Saga.

All winter long, people in the Green Hollows have prepared for a final battle with Gnag the Nameless and the Fangs of Dang. Janner, Kalmar, and Leeli are ready and willing to fight alongside the Hollowsfolk. But when the Fangs make the first move and invade Ban Rona, the children are separated.

Janner is alone and lost in the hills; Leeli is fighting the Fangs from the rooftops of the city; and Kalmar, who carries a terrible secret, is on a course for the Deeps of Throg. Monsters and Fangs and villains lie between the children and their only hope of victory in the epic conclusion of The Wingfeather Saga.

Full of characters rich in heart, smarts, and courage, The Warden and the Wolf King is a tale children of all ages will cherish, families can read aloud, and readers' groups are sure to enjoy discussing for its many layers of meaning. Extra features include new interior illustrations from Joe Sutphin, funny footnotes, a map of the fantastical world, inventive appendices, and fanciful line art in the tradition of the original Frank L. Baum Wizard of Oz storybooks.

Andrew Peterson: Andrew Peterson is critically acclaimed in the music industry, and his lyrics and songwriting are compared by reviewers to James Taylor, Marc Cohn, and the late Rich Mullins. He's married to Jamie; they have two sons, Aedan and Asher, and one daughter, Skye.

Joe Sutphin was known in school as "that kid who can draw." He is the illustrator of Dr. Critchlore's School for Minions by Sheila Grau and the New York Times bestselling novel Word of Mouse by James Patterson and Chris Grabenstein.