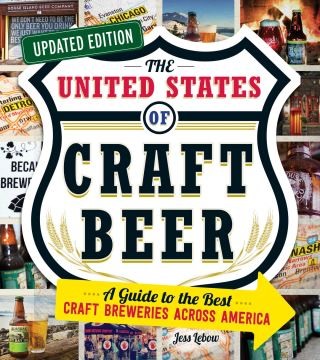 A Guide to the Best Craft Breweries Across America

Discover the best craft beer breweries in America as you travel state by state with this fun and updated craft beer roadmap.

From California to Maine, there are tons of great craft breweries to explore!

In The United States of Craft Beer, beer expert and home-brewer Jess Lebow invites you along this state-by-state exploration of America’s greatest breweries. From Jack’s Abby Brewing in Massachusetts to Maui Brewing Company in Hawaii, this guide takes you to fifty of the best breweries in the country and samples more than fifty-handcrafted beers. Learn everything you want to know about the people who make the nation’s best-tasting beers and the innovative brewing methods that help create the perfect batch. Now you can experience the ultimate bar crawl, as you sample and savor every delicious sip the United States has to offer!

Jess Lebow: Jess Lebow worked for Budweiser and Redhook selling and distributing beer in the Seattle area during the microbrew boom of the late 1990s. During that time, he tried nearly every craft beer in the Pacific Northwest and any he could lay his hands on from around the nation. Five carboys, nearly 100 delicious batches, at least a dozen not-so-delicious ones, and only God knows how many crimped bottle caps later, he figures he’s drank his weight in beer many thousand times over.