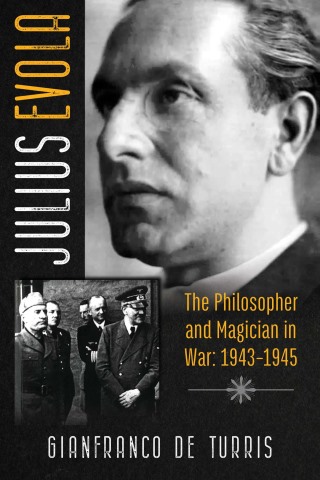 • Traces the Baron’s activities in Italy, Germany, and Austria during World War II

• Draws on personal conversations with those who knew Evola, new documentation never before made public, and letters from the Hakl and Scaligero archives

In this exploration of Evola’s inner and outer life from World War II into the early 1950s, Gianfranco de Turris, who knew Evola when he was alive and is the executor of his estate, offers a new portrait of Julius Evola and debunks many of the pseudo-myths about his activities during the war. Drawing on personal conversations with those who knew him and new documentation never before made public, including letters from the Hakl and Scaligero archives, the author traces Evola’s activities--including his time on the run and living under assumed names--in Italy, Germany, and Austria from 1943 into the mid-1950s. He shares a thorough account of the Baron’s sojourn at Hitler’s headquarters in Rastenburg, his work for the German secret military services, and his passionate rejection of the racial theories that were the core of Nazi ideology. The author outlines Evola’s critiques of Fascism and Nazism and also explores Evola’s disapproval of the Italian Social Republic because it was destroying traditional values in favor of modernity.

Detailing the Baron’s occult and magical work during the war, de Turris shows that the only thing Evola took with him when he escaped Italy was the UR Group papers, material that would later become the three-volume work Introduction to Magic. Sharing details from Evola’s long hospital stays during and after the war, the author proves that the injury that led to Evola’s paralysis was caused by an Allied bombing raid in Vienna and not, as rumor has it, by a sex magic act gone horribly wrong. The author shares photographs from the time period and the Baron’s correspondence with René Guenon on the possibility of restoring the spiritual and magical power of an authentic Freemasonry.

Offering conclusive evidence that Evola was not part of the Nazi regime, de Turris sheds light on the inner workings of this legendary occult figure and what Evola believed was the best approach for the magus to take in the modern world.

Gianfranco de Turris: Gianfranco de Turris is one of the foremost scholars on Baron Julius Evola. A journalist for both radio and television, he is the author of more than 20 books in Italian, both fiction and nonfiction, as well as many artistic and political essays. He has been awarded the Italian Prize for Science Fiction eleven times. He lives in Rome.