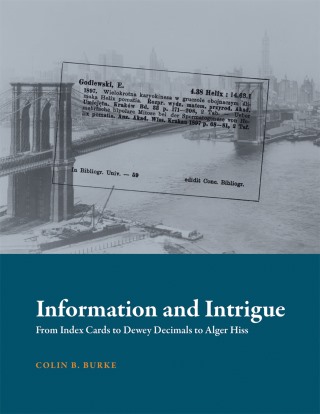 From Index Cards to Dewey Decimals to Alger Hiss

An account of Herbert Field's quest for a new way of organizing information and how information systems are produced by ideology as well as technology.

In Information and Intrigue Colin Burke tells the story of one man's plan to revolutionize the world's science information systems and how science itself became enmeshed with ideology and the institutions of modern liberalism. In the 1890s, the idealistic American Herbert Haviland Field established the Concilium Bibliographicum, a Switzerland-based science information service that sent millions of index cards to American and European scientists. Field's radical new idea was to index major ideas rather than books or documents. In his struggle to create and maintain his system, Field became entangled with nationalistic struggles over the control of science information, the new system of American philanthropy (powered by millionaires), the politics of an emerging American professional science, and in the efforts of another information visionary, Paul Otlet, to create a pre-digital worldwide database for all subjects.

World War I shuttered the Concilium, and postwar efforts to revive it failed. Field himself died in the influenza epidemic of 1918. Burke carries the story into the next generation, however, describing the astonishingly varied career of Field's son, Noel, who became a diplomat, an information source for Soviet intelligence (as was his friend Alger Hiss), a secret World War II informant for Allen Dulles, and a prisoner of Stalin. Along the way, Burke touches on a range of topics, including the new entrepreneurial university, Soviet espionage in America, and further efforts to classify knowledge.

Colin B. Burke: Colin B. Burke is the author of several works on information and intelligence history, including Information and Secrecy: Vannevar Bush, Ultra, and the Other Memex and The Secret in Building 26. He lives in Maryland.