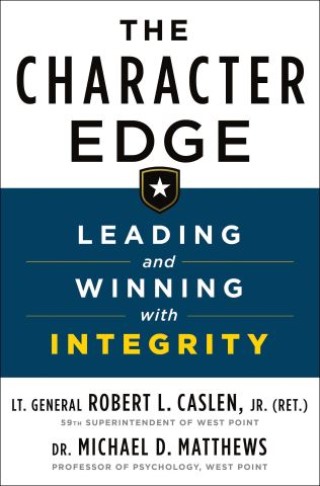 Leading and Winning with Integrity

The former superintendent at West Point and a psychologist explain why all successful leaders rely on a foundation of strong character.

Among the most successful leaders throughout history—from Abe Lincoln to Rosa Parks, Mahatma Gandhi to Susan B. Anthony, Martin Luther King, Jr. to Nelson Mandela—some were brilliant mathematicians and economists, others were creative visionaries, still others were masterful at strategic planning. Their mastery of their field wasn’t the secret to their highly effective leadership. All of their skill, grit, resilience, charisma, and courage emanated from one thing: their strength of character.

Character—the moral values and habits of an individual—is in the spotlight now more than perhaps at any other point in modern history. Politicians distort facts. Corporations cheat customers and investors. Athletes are caught using illegal supplements. In addition to harming our culture at large, these failures of character have a profound and undermining impact on leadership.

The authors of this book are experts on the value of character, its correlation with successful leadership, and how to build it in individuals and prospective leaders. General Robert L. Caslen, Jr. served the US Army for over 43 years and served as Superintendent at the US Military Academy at West Point. Psychologist Dr. Michael D. Matthews is a Professor of Engineering Psychology at West Point who has focused on the psychology of character for years. Together they witnessed firsthand that raw talent is not enough to stand on its own; successful leadership relies on the critical foundation of a strong character.

In The Character Edge they leverage their perspectives to offer an empowering, story-driven argument—backed by the latest scientific research—that character is vital to success. They give readers the tools to build and sustain character in themselves and their organizations by testing readers' strengths of the gut, head and heart and teaching how to build trust and nurture the seeds of character.

Robert L. Caslen, Jr.: Lieutenant General Robert L. Caslen, Jr. is the 29th president of the University of South Carolina. Caslen is a retired Army lieutenant general and former superintendent of the United States Military Academy at West Point. After retiring from the Army in 2018, Caslen became the senior counsel to the president at the University of Central Florida. Caslen grew up in Vermont, worked in his family’s ski lodge, and then was recruited to play football at West Point. Along with his bachelor’s degree from West Point, Caslen holds an MBA in finance from Long Island University and a master’s in industrial engineering from Kansas State University. He and his wife, Shelly, have been married for over 40 years and have three sons and four grandchildren.|||Michael D. Matthews is Professor of Engineering Psychology at the United States Military Academy at West Point. He served as President of the American Psychological Association’s Society for Military Psychology from 2007 to 2008 and is a Templeton Foundation Senior Positive Psychology Fellow. From 2014 to 2015, he served as a Fellow for the U.S. Army Chief of Staff’s Strategic Studies Group. He has authored more than 250 scientific papers and edited several books on military psychology, and is the author of Head Strong: How Psychology is Revolutionizing War (Oxford University Press, 2014, revised edition, 2020). His book (coedited with David M. Schnyer), Human Performance Optimization: The Science and Ethics of Enhancing Human Capabilities (Oxford University Press) was published in 2019.